Adıyaman, a city in southeastern Turkey, was the famous scene of persistent UFO flaps in 2001, 2002 and 2004. As in many UFO cases the Turkish media covered the sightings. Once again it was exciting and eye-opening to see UFO news in our mainstream media, especially the 2002 case as there were many civilian and official witnesses and their testimonies received massive coverage.

The Adıyaman region is also widely known for its mysterius Mount Nemrud and an ancient brotherhood established by King Antiochos I of the Commagene Kingdom. Historical records, archaeological investigations, paranormal and mystical facets make the region special in many ways. Before we start our time travel to the past let’s take a look to the recent UFO sigthings from the area…

June,7, 2001 – Adıyaman
Around 22:00 pm, four security guards saw a huge, round shape object taking off from the ground. The bright object was almost the size of a house. While they were radioing their sighting to their superiors there were other witnesses in the same area. The other group consisted of seven policemen. They described the object as a gigantic “ashtray” flying through the sky at a high speed and emitting red and yellow lights from its window-like openings. The lower part of the object looked like a saucer and it was spinning. The upper part of the flying object was motionless. Witnesses also drew the object in their testimonies.

January 26-27,2002 – Adıyaman
On the night of January 26, around 11:00 pm, local police got a phone call reporting an object. The UFO was seen in the eastern side of Adıyaman over the Kahta highway. A patrol team on duty on the same highway was called by radio and they confirmed the presence of the UFO. That night, police cameras filmed the UFO for five hours. The next day two more similar flying objects were seen in the western side of the city. The police filmed them as well. Later, according to the report given by the city’s governor, a total of five UFOs were seen between 23:00 pm and 05: 20 am in the area. All these sightings were witnessed by police officers and hundreds of civilians. Tapes were sent to various national scientific investigation centers to be analyzed. Detailed reports of the tapes showed that the 2002 UFO sightings were very real.
In this case the approach of the police force and the city governor was completely cooperative and helpful. The 2002 Adıyaman UFO cases were accepted by them and analysis of the tapes were shared with the media and public.

December 30th, 2004 – Adıyaman
This time the witness was a young student who managed to film the UFO with his own video camera. The sighting happened in the north west side of the city. According to his testimony (and the pictures which were later published in newspapers) the flying object emitted green and purple lights and flew in circles very fast. It was only a five minute sighting but it was enough clear to see the object in detail.

These three UFO sightings were not the first—and won’t be the last—in the Adıyaman region. Just like many other parts of Turkey, Adıyaman and its surroundings have a special energy which attracts multiple UFOs. Turkish land is full of ancient civilizations’ spiritual, celestial and hermetic vibrations. Our known history goes back 6000 years. And the archaeological ruins of ancient civilizations are not merely inanimate walls and monuments. They still carry the spiritual energies inside of them, in every stone, in every inscription and sculpture. They still remember what happened thousands of years ago. Mount Nemrut in Adıyaman officially houses King Antiochos’ tomb, a temple and a magnificient monument with important sculptures of the Gods. King Antiochos wanted to create a temple, a home for the Gods who visited this mystic hilltop more than 2,000 years ago.

A CELESTIAL KINGDOM ON THE EARTH
King Antiochos wanted to be buried in the 7238-foot Mount Nemrut. His tomb is under a huge man-made tumulus on top of the mountain, which is also a temple for the Gods. The tumulus consists millions of small rock pieces and is shaped generally like a pyramid. As the natural and geographical conditions of the region are extremely difficult, it is hard to realize what kind of technology was able to build a magnificent temple on the mountain top. Even with today’s resources, climbing Mount Nemrud is extremely difficult and dangerous. Gigantic sculptures of Gods and the other monuments are located in three different sides of the hilltop. The eastern terrace has Apollon, Goddess Commagene, Zeus, God-King Antiochos 1 and Artagnes. The northern terrace was a holy path for the priests. The western terrace was the most holy part of the temple. Within it, the same Gods are represented in huge sculptures with more a detailed and artistic style. 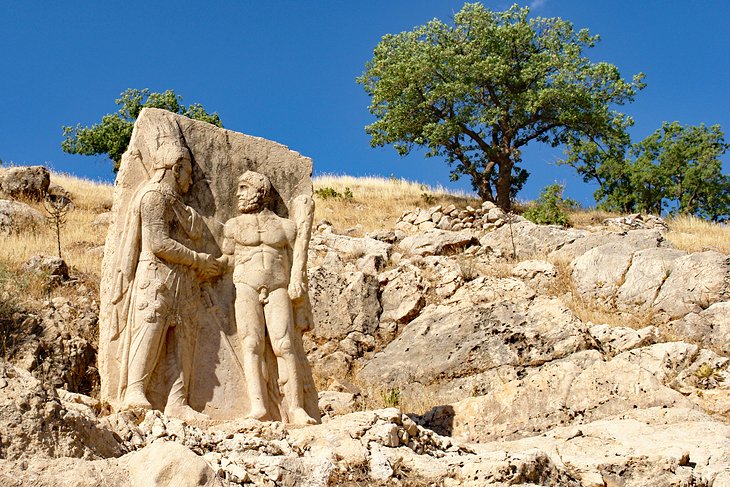 Antiochos loved the stars. That’s why the world’s most ancient horoscope was built on the Nemrut temple, respresenting the King’s birthday in the shape of a lion. According to some other interpretations he was crowned on this date. The lion was also the symbol of the Commagene kingdom. The horoscope shows the sky of 109 BC, July 14th, while the sun is in Leo. 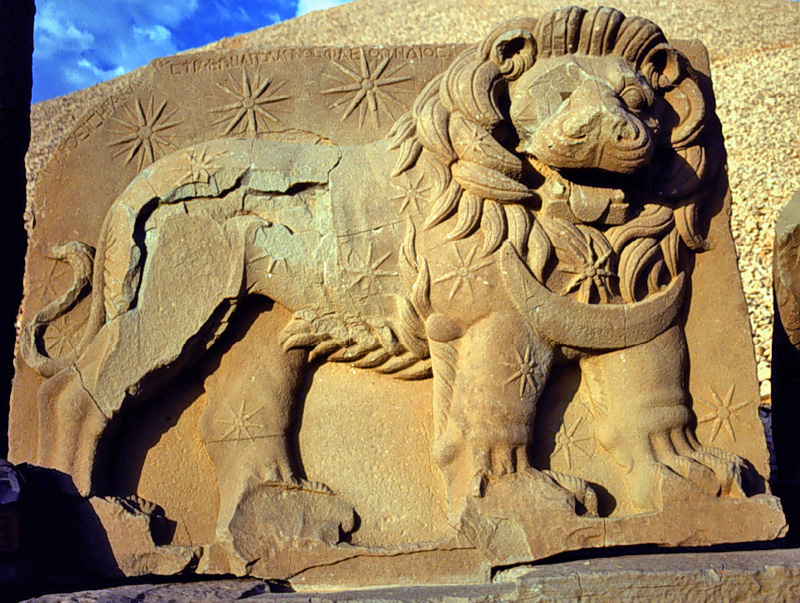 King Antiochos saw the mountain as a home for the Gods and built this temple as a sanctuary for himself and for them. In an inscription on the temple, King Antiochos says that he decided to built a sacred temple here according to the Gods’ instructions. According to tradition there was a time when the Gods descended to earth and visited their followers. Antiochos was desperate to make them happy and wanted to make sure that after he had passed away the priests would continue to appease them. 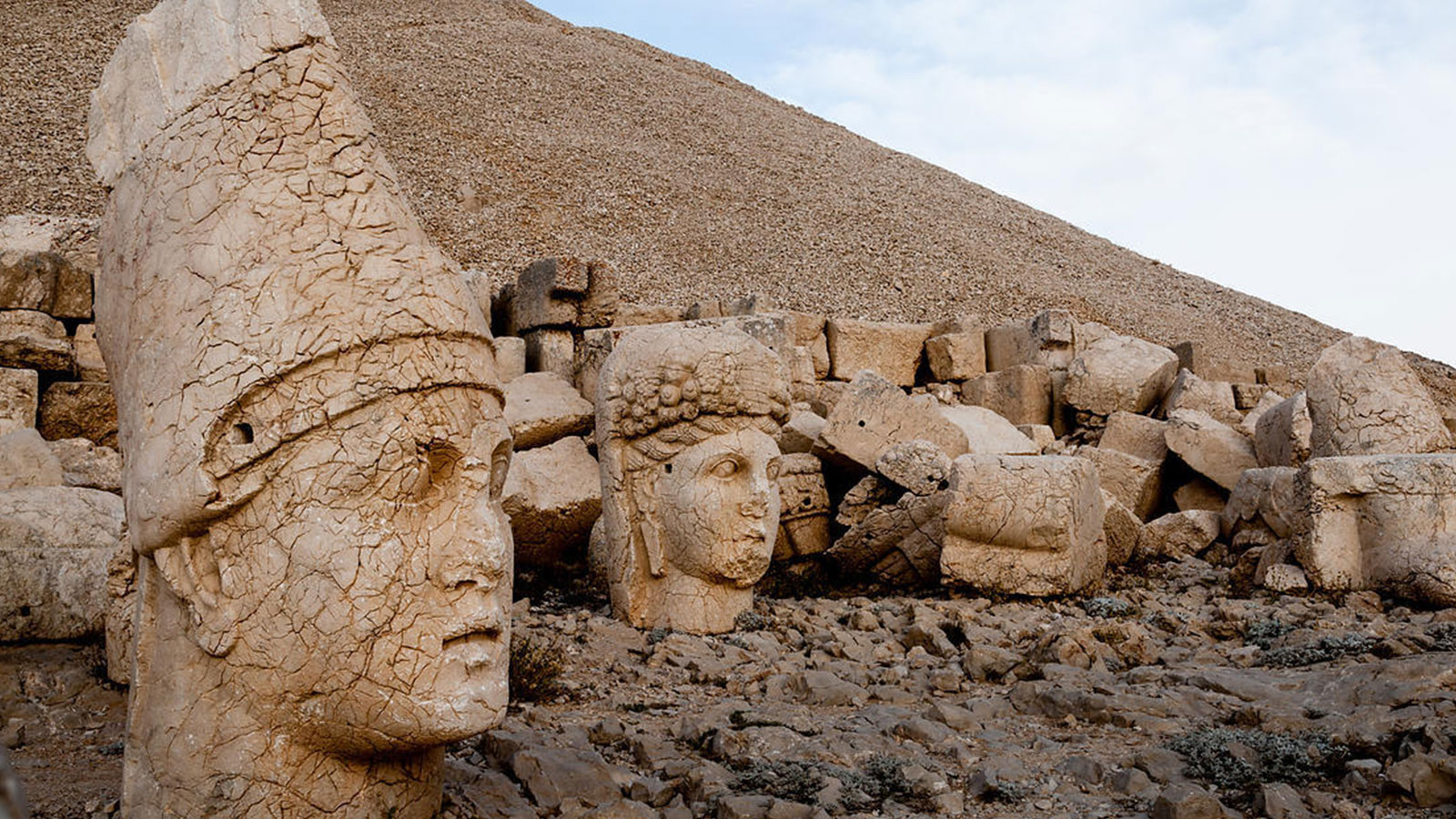 The gods are not the only residents of this temple. There is one more symbolic message there; the sculptures of four holy beings: Lion, Bull, Eagle, Angel ( or Human ). 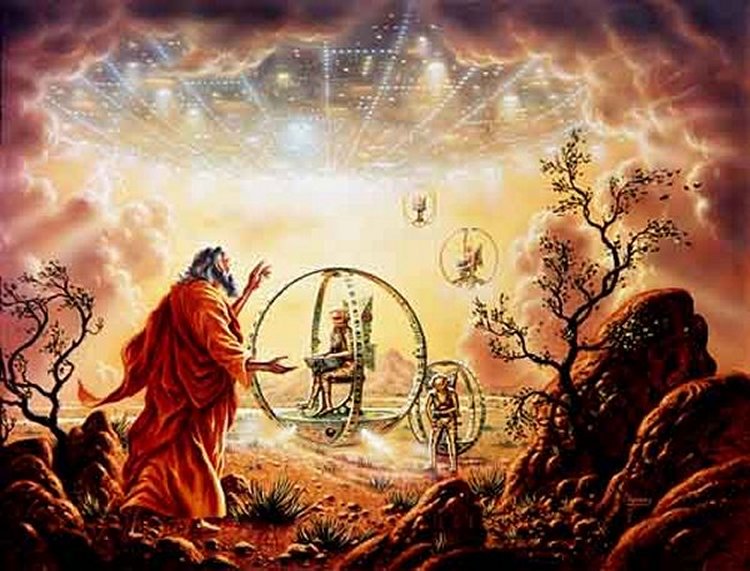 Remember the prophet Ezeikel’s vision? He saw a strange creature with four heads and described them as a lion, a bull, an eagle, and an angel. They were in a circular object or machine. In the last 30 years this vision has been interpreted as a space ship, as a UFO or a technological machine coming from another dimension. It is hard to say what was exactly Ezeikel saw. But if you want to see his desciption I suggest you to check two very meaningful Tarot cards; The World and the Wheel of Fortune cards. Both Tarot cards have the four sacred beings of the Old Testament. And especially the Wheel of Fortune has a remarkable resamblance with Ezeikel’s vision.

What could be the link between Nemrut Gods, Ezeikel’s vision and Tarot cards? Maybe the very famous philospher George Ivanovitch Gurdijeff would know the answer, as he had his own theories about the Commagene Kingdom. When Gurdijeff started his mystic travel or mystic path he stopped by Nemrud, looking for a mysterious school or brotherhood established by King Antiochos I. Not only Gurdijeff but another very well known name of Theosophy, Helena Petrovska Blavatski, traveled through Turkey in search of the same mysterious school or fraternity. And according to her the roots of the secret school came from the Annunaki in ancient Mesopotampia. In Gurdijeff’s teachings the Tarot cards are used as a tool of finding the answers. Especially The World card also represents the inner path. Probably Gurdijeff was following the Path on the way to Nemrut. He was also aware of the regional legends of Nemrut. July 14 was not only the coronation day of the King, it was also the celebration of the day when the Gods descended to the earth. 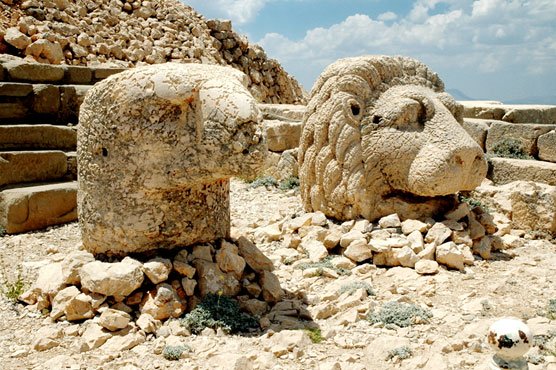 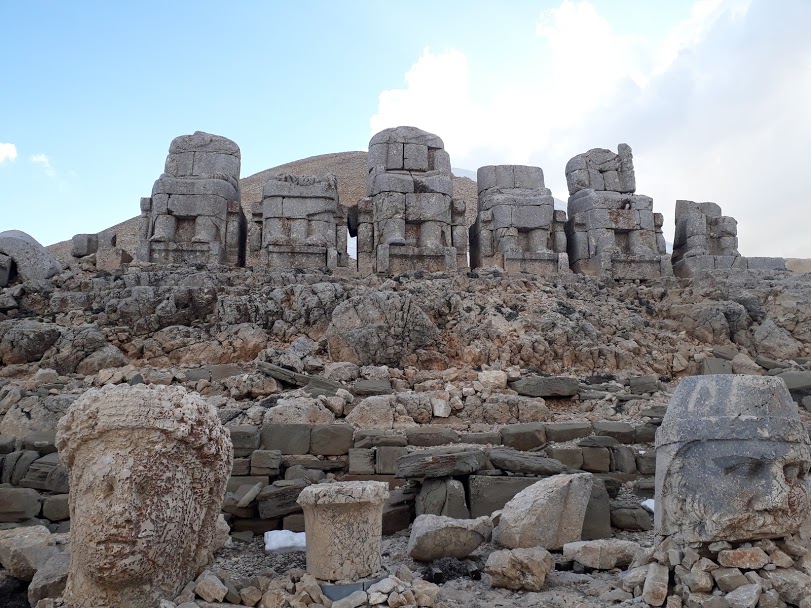 UNDERGROUND TUNNELS OF NEMRUT
Nemrut may have many secrets still waiting to be solved but the existence of an underground tunnel system is no longer a mystery. The tunnels were found as the result of several archaeological excavations. Archaeologists hope to find the lost kingly tombs at the end of these tunnels. But some UFO-paranormal investigators have different ideas about the tunnels…

Pioneering Turkish UFO investigator and writer Mr.Haluk Egemen Sarıkaya thought the underground city Agartha was related to the Nemrut tunnels. Turkey’s underground cities and tunnels are world famous and they cover a very wide area starting from the west to the east. It is said that subterranean city Agartha was founded by Extra Terrestrial beings in our distant past. It is also said that Agartha, a center of Extra Terrestrial – spiritual – sacred world, is connected to the other underground cities by tunnels.
The idea of a mysterious school or brotherhood based on Annunaki or Extra Terrestrial roots in Turkey is not surprising at all. Many investigators have followed the path searching for this cosmic school. The search is still going on. And Nemrut keeps calling the truth seekers.