An old Turkish saying goes: “The past and the future of the Turkish nations are written in the stars.”

When my ancestors, the Shamanic Turks, started their journey from Central Asia towards today’s Turkey 5000 years ago, they brought with them a very important tradition, and a vital view of the cosmos that resonates today. They knew that we are not alone in the universe, that life and intelligent people can be found in other stars—and that these people come to Earth to visit and interact with us.

Maybe that’s why in modern Turkish society UFO sightings or abduction cases are considered normal. Maybe that’s why Turkish people’s approach is extremely open minded and understanding to Extra Terrestrial contacts and visits. When there is a UFO sighting you can see the news on the front pages of the most important national papers and you can watch the coverage on prime time TV.

Turkey was and is a special place ripe with spiritual and paranormal unexplained cases and mysterious places and our folklore is woven with tales of these things. Our mythology and history are a living proof of the cosmic consciouness. The original Turks were called “GökTürk.” Gök means sky, Türk means human, one, people. The translation: “Sky People”. In our mythology and traditions the contacts with people who came from the sky always have a very important place. Our very early creation stories started with the existence of “Flying Gods” Kara-han. Everything started with a God who had the gift or the ability of flight. Ancient Turks also believed in a God who lives in the sky and they called him “Sky God”. Our epic creation story starts like this…

“Now there is no earth,There is only water, only endless waterClear to the four corners of nothingWithin this brightness, within this blankness,Is only God Kara-han, the Gander flying lonely.”

Not only the Gods, also the leaders of ancient Turkish tribes had different, paranormal qualities. One of them was Oguz Kagan who was a historical personality and the founder of the nomadic Hun-Turk Empire over 2200 years ago.

His life started in extraordinary conditions. According to tradition he started to talk when he was only 3 days old. In fact he was a celestial soul who lived in a physical human body. When he was born his skin color was blue. The general aspects of his body were quite different from any other man. His feet were like a bull’s, his hands were like lion claws. And his body was covered with hair. This description easily brings to mind a hybrid being who has half-human/half non-human physical characteristics. And the most important thing is that he was accepted and highly respected because of his different aspects instead of being rejected because he was different from the others.
When the time came for him to find a wife and start to a family another interesting encounter happened…
“One day Oguz Kagan was praying to God. It got dark. And a piece of light fell to earth from the night sky. The light was brighter than the moon. Inside of the light there was a girl. Oguz Kagan saw the girl, she was alone. She was wearing a spark on her head, a spark that was brighter than the North Star.

Oguz Kagan liked the beautiful girl. They slept together and she got pregnant. The next day while Oguz Kagan was sitting in his tent he was visited by a male wolf. The wolf came from a ball of light which suddenly appeared in the tent. From this marriage Oguz Kagan had 3 sons. He named them Sun, Moon and Star.”
Oguz Kagan is a human being from the earth, and he makes love with (an alien) woman who comes from the sky in a ball of light. Also a wolf comes to visit him from nowhere traveling in a ball of light too. 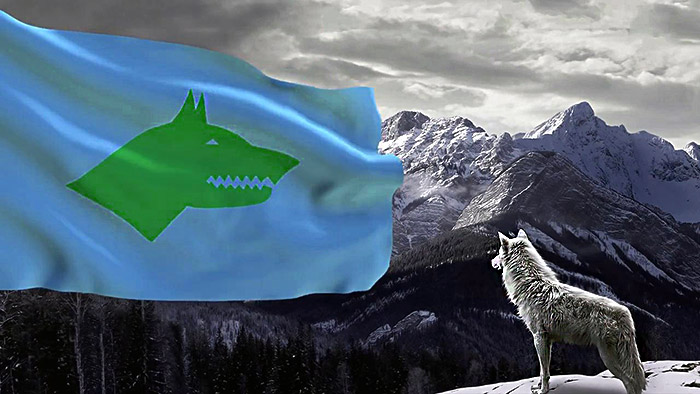 In one of the stories about him there is an interesting description of a metal house. The story says:

“Oguz saw a house on the road. The roof was made from gold, the windows silver and the walls iron. The house had a door but there wasn’t any key.”

In another narration we see the description of a “house with wings.” A flying house maybe? This house has many corners and it’s shaped like a polygon. I have to add that thousands of years ago Shamanic Turks were nomadic, they used to live in tents just like Native Indians. A house made of iron was something completely unknown to them.

Another story from the Uygur Turks:
“There was a huge tree between two rivers. One day from the sky a light landed over the tree. With the light, music started to play. At the same time the trunk of the tree was swelling out and getting larger. The tree was opened and inside there were five rooms. Bugu-han the leader of the Uygurs was born from these rooms (or he came out from there).” Something landed from sky with light and music. Here a tale from Turkey’s ancient tradition anticipates another tale which has become a modern classic of UFO lore: “Close Encounters of the Third Kind”, in which the flying saucer sends code messages with color and music.

WOLF VISITS IN TURKISH MITHOLOGY
The wolf was a very important animal and a mystical symbol for Gök Türks. They believed that they were created by the wolves. Wolf was a noble, protective animal and a spiritual guide. Many other creation stories start with the visit of a wolf. Another sample;

“A Turkish tribe leader had two beautiful daughters. They were such gorgeous girls that no man from earth was worthy to marry them. He had a dream. In his dream he was told that his daughters were made to marry to Gods, and a new nation would rise from this union. Tribe leader built a high tower and put the girls there. They started to pray and wait for the Gods. And one day the Sky-God they had been awaiting arrived. The God was in the shape of a male wolf. The girls realized that he was the one that they had to marry. The wolf took the girls with him. They got married, and from this marriage were born the Oguz and Uygur Turks.”

In ancient Turkish society, the symbol of wolf was everywhere, in daily life, in narrations, religious beliefs, in the flags and in money bills. Interestingly, in the present day some alien abductions start with the appearance of a wolf. The abductee may see a wolf at the beginning or at the end of the abduction case. Writer and abductee Whitley Streiber stated that he saw the wolves during and after some of his abduction cases. And earlier, long before he started to remember his alien abductions, when he was writing fiction, one of his best sellers was “Wolfen”. It was a story told from the vision of wolves. Many abductees mention the hypnotic effect of Gray Alien’s big deep dark eyes. And sometimes the memory of the Gray is shifted with the memory of a Wolf.

NIGHT TIME ATTACKS AND SHAPE SHIFTERS
For my ancestors, Shamanic tradition was a path between earth and sky. Shaman was the special soul incarnated in human body, healer, psychic who can contact with celestial beings and visitors from other worlds. Today’s supernatural legends were the daily reality or the nighmares of the darkness for Shamanic Turks. The existence of dangerous and aggresive types of non-human beings who spent time chasing and harming new born babies and their mothers created a great deal of fear in many Turkish tribes in Central Asia.

According to written texts the Ancient Turks’ biggest enemy was a creature called “Al Karısı” (Scarlett Woman). This was a tall, very ugly looking female creature, with a big head, long hands and nails and strange-shaped feet. It is also said that she wore a red costume. It is said that Scarlett Woman used to eat the internal organs of the new born babies, their mothers, and horses. She was also trying to get young girls and young boys as her victims.
She was also a perfect shape shifter. Sometimes she showed herself as a woman and in other times changed into a cat, dog, goat, bird or a fox. There are some cases where Scarlett Woman changed to look like a family member of the young mother.

In some regions and in some villages of modern Turkey they still fear the Scarlett Woman.The stories about her are always similar. She gets into the victim’s room. Suddenly the victim loses the ability to move, talk or scream. Scarlett Woman has psychic powers such as creating a total hypnosis or cataleptic condition over her victims. The victim can see and hear everything but cannot speak, scream, ask for help or move even though he/she is still conscious.

Only a very quick reaction of praying can save the victim from the hands of the monster. Sometimes one or two men from the family will stay with the mother and her newborn baby and they try to keep the mother awake. Because sleep is one of attractions to Scarlett Woman. When there is no protection the result is a sudden death or a long term illness. Another protection against Scarlett Woman is to stick a needle or stake into her heart just like the vampire legends.

General aspects of an alien abduction start with a huge heaviness and the difficulty of movement. The abductee can see and hear everything but cannot speak, scream or move. Maybe alien abduction is not a very contemporary phenomenon. Maybe this procedure started a long time ago and it was called something else according to time and the geographical regions and beliefs of the world.