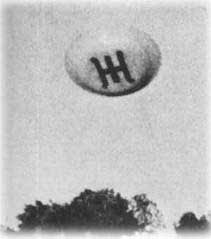 When I first heard about the UMMO UFO contact case I was a Spanish Philology student at Istanbul University. In those years I was reading everything on UFO’s and I was reading anything in Spanish as well. UMMO was a perfect topic for me as it was a close encounter/landing UFO story from Madrid. The UMMO case had affected many people, had left behind much evidence. It took place in the 1950’s, long before the age of the internet, when that much-maligned tool, snail-mail, was an important medium for communicating. Now, word of ET-UFO contacts spreads at the speed of electrons all around the world. Then? It circulated among UFOlogists in the same mail bags with Valentine’s cards and junk mail. And sometimes the aliens used snail-mail too, as we shall see.

Just like many UFO cases, the UMMO case is a remarkable reflection on its era and its contemporary society. In late 1950’s, just alittle more than a decade after the Second World War, European skies were invaded by UFO’s. France, Italy and Spain were lucky to have all those wonderful day and night UFO flaps. It was exciting but at the same time it was a little bit scary, as those countries and their citizens were badly traumatized in the recent wars. France and Italy were struggling to rebuild after the Second World War. And Spain was still healing from its own destructive Civil War. General Francisco Franco emerged as dictator after the Spanish Civil War, ruling for the next forty years. Like many dictators he was a big proponent of censorship and coverups.
In those years the media consisted of newspapers and radio. And the Spanish media was totally under the control of the military government. So there was no political diversity or freedom of opinion. Perhaps it was for this reason that this fascist Mediterranean country was chosen by Extra Terrestrials from UMMO for a major UFO contact. Spanish writers, artists, philosophers and intellectuals couldn’t openly engage in political conversations in the Franco years. So those oppressed thinkers, epsecially in Madrid, secretly engaged in the Spanish tradition of “tertulia,” a kind of intellectual think-thank meeting. In the late 50’s, a buzz started circulating through these tertulias. Something new and exciting was happening, it was whsipered. Yes, it was true at last… UFO’s and extratrerrestrials were among us.
THERE’S AN ALIEN ON THE PHONE FOR YOU, FERNANDO
Fernando Sesma was the director of “Association of Friends of Space Visitors” in those years. He was also a teacher and a journalist who organized weekly tertulias in the basement of a Madrid café. Extra Terrestrial life, occultism and paranormal mysteries were the topics of Sesma’s meetings. One day Sesma got the first of several strange phone calls. The caller introduced himself as DEI 98 and said that he was an alien visitor from the planet UMMO, which orbits the star IUMMA (Wolf 424 on our astronomical maps.) Sesma was given detailed information about UMMO’s political, social and religious system. Later Sesma was also given an extraterrestrial stone with special symbols on it. According to the phone conversations, thousands of visitors from UMMO had been living in many countries on our planet since March, 1950, mostly in Europe and Spain. UMMO men and women had Nordic physical aspects. As they looked a great deal like North European people, it was easy for them to live among us without causing suspicion.

When UMMO contact started, nobody knew about Grays or Reptilians. There had been no “official” abductions. So the idea of friendly, protective and helpful Extra Terrestrial visitors was extremely attractive to UFO fans and to the first generation of UFO investigators like Sesma and his friends in the tertulias. UMMO beings were generally open to contact but there was a problem: their vocal chords died after a certain age so they communicated telepathically between each other. But their human contactees didn’t have this ability. As a result the only way to reach humans was sending them typewritten letters.
The visitors form UMMO were masters of human language; they were speaking Spanish in Spain, French in France and so on. In Spain, two of them posed as Danish doctors. They placed an ad in a newspaper and hired a man to type their letters for them. He accepted the work and started to type “scientific” letters for his Danish employers. The letters were written partly in UMMO language and symbols, which he claimed was a fully developed language. 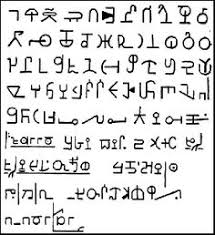 All over the Spain, hundreds of people started to get the UMMO letters. Some of them were posted from other countries, some from Madrid or Barcelona. Writers, lawyers, journalists, policemen and many others were sent UMMO letters, which were sealed with a special logo. Even some UFO investigators like Antonio Ribera and Rafael Farriols were sent informative letters. Some time later, the contactees were informed of an imminent UFO landing. The landing was going to be in the daylight hours and in a very public place.
And so it occurred. On the morning of February 6th, 1966, the first UMMO space ship appeared in Madrid suburb of Aluche. The object was orange in color, almost 40 feet long, disk shaped and luminous. On the lower part of the ship a huge UMMO logo was clearly seen: the same seal as on the letters. The object landed for a short period and left a perfect landing trace on the soil.
This sighting was seen by many witnesses. People took pictures of the ship from different parts of the city. One of the most important witnesses was psychiatrist Jordan Peña who took the object’s picture while it was in the sky and later photographed the landing marks. This was the long-expected UFO sighting that had been discussed for years in the tertulias! There was enough physical evidence, pictures and a lot of witnesses to make Spanish UFOlogists very excited indeed. And the excitement spread to the general public. Not even government censorship could contain the flap. The UMMO ship pictures soon appeared in daily newspapers. Prominent UFO investigators checked the landing area and found radioactive contamination around the landing marks. After another landing on June 1st, 1967, strange tubes were found which contained a liquid which evaporated as soon as the tubes were opened. There was enough material to fill books. So Antonio Ribera and Fernando Sesma wrote on the phenomena and were published. 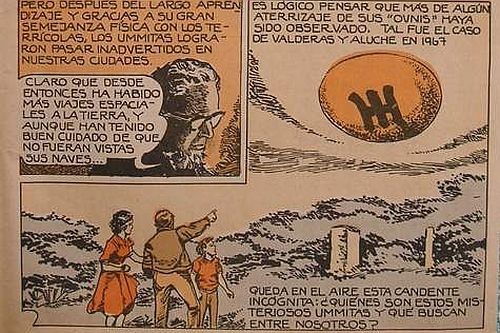 SPACE VIRUS KILLS GIRL
In the meantime those so-called Danish “doctors” were quite busy. They managed to meet and gain the confidence of a noble Spanish lady called Doña Margarita de Villasanta. She lived in a castle in Albacete and was a very important personality in Spanish high society. The Danish doctors never revealed their real identity or mentioned UMMO to her. But they lived for a while with Doña Margarita and her children in the huge mansion. They even cured her psychosomatic problems. Doña Margarita didn’t hesitate to give them permission to set up a huge laboratory in the basement of the mansion, where they performed scientific experiments on numerous animals.
After a while Doña Margarita’s daughter died. She had been suffering from leukemia. Her body was taken to Madrid by the Danish doctors. But before they reached Madrid, for some reason they amputated her hand and removed one eye. According to them, she was infected by an Extra Terrestrial virus and the infection had affected her hand, eye and inside of her mouth.
Doña Margarita’s other children blamed her for their young sister’s death and sued their mother. They accused her of occult and witchcraft practices. The Danish doctors had to stop their experiments as Interpol and CIA opened an investigation of the case. The doctors vanished and the UMMO mission and contacts slowed down, then stopped. That virus didn’t kill only the young girl, it also killed the UMMO activity.
But even in 1980’s big names such as Antonio Ribera kept investigating the case. They had all those photographs and letters, lots of evidence, to fuel their passion for the truth. But the mysteries of UMMO weren’t solved until “Third Generation UFO Investigators” opened the case again. 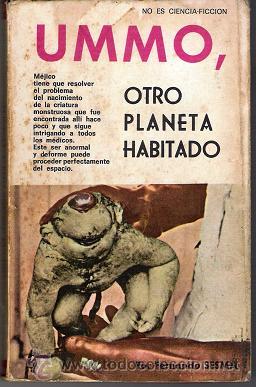 REVELATIONS
While I was in Spain in the late 1990’s, I got together with some of those young UFO investigators, eager to discuss the UMMO case. But when I met Ribera he was tired of it and he politely let me know that he really didn’t want to speak about this case any more. In Spain the UFO approach had become more critical and realistic. Young UFOlogists or paranormal researchers were now coming from a deeper scientific, academic and journalistic background. They were well equipped with modern computer technology. They knew the tricks and how to catch them as well. And after a detailed investigation it was found out that famous UMMO ship pictures were fake. Very fake…
After that, the confessions came. The most surprising part of the story was the confession of Jordan Peña, one of the witnesses who took the UMMO pictures. In a detailed interview he explained how and why he had set up this long term hoax: he wanted to perform a social experiment. He wanted to see society’s reactions in a situation of UFO visits or landings. He wanted to see how people in a repressed society are eager to believe something that is properly fed to them. He made the model UFO’s, took the pictures. Even the landing marks and radioactive substance were fake (it was provided by his friends.)
Like a good conspirator, Jordan Peña admitted that he got help from some higher levels to prepare to this game. But it wasn’t the Spanish government. He said some groups from another country provided him the contacts, material and resources to set up the game. Although he convinced the regular newspaper readers in one way or another, the “real” UFO investigators never believed him. But it was necessary to wait for almost 30 years to before unveiling the hoax.
It is difficult to think that Jordan Peña did all this just for fun or to see society’s reactions. This cannot be accepted as an innocent joke or entertainment. The UMMO case was another sample of disinformation. Yes, just like all the other disinformation we are constantly fed without our knowing it. In UFOlogy we don’t need entertainment. UFO’s as entertainment are fed to us on TV shows, movies and in music video clips. Some hoaxes take 30 years to be exposed. Others, particularly in our modern information age, have a shorter shelf life before they become rotten and are disposed of. But they all cast discredit on the field of UFOlogy. And sometimes I can’t help but think that that very fact is the agenda behind them, not someone’s sense of humor.
UFOlogists and the public deserve the truth about extra terrestrial phenomena. Don’t you? FARAH YURDÖZÜ