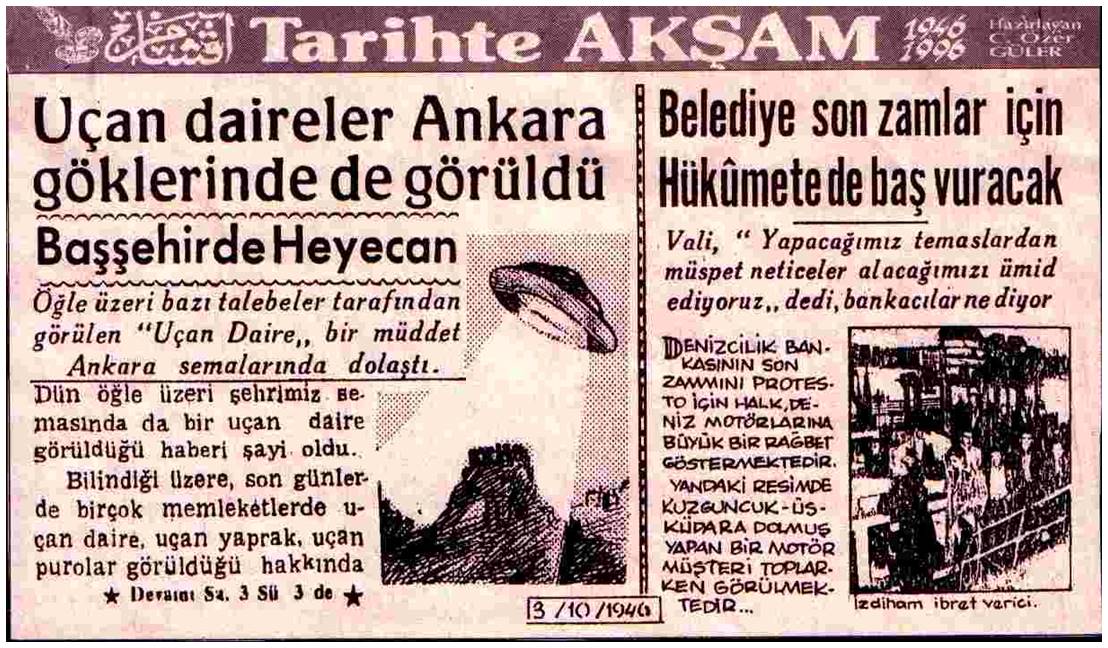 My native Turkish land has always been very rich with UFO sightings. Our mythology and historical records show numerous close encounters with mysterious beings who come from stars or other dimensions.
The original name of my Turkish ancestors was “GokTurks” which means “Sky People.” Ancient Turks believed that their leader was visited by a woman who came from a star. And this mysterious woman who descended in a ball of light got pregnant from the Turkish tribe’s leader. She gave birth to 3 sons who were called Moon, Star and Sun. They became the founders of new Turkish generations.
Symbolic or historical, all these narratives gave an identity to my nation. Turkish people are very spiritual and open minded to the idea of Extraterrestrial Intelligent life. As you know, also the Turkish press is extremely open minded to UFO sightings. When there is a UFO sighting in any big city or a small town of the country you can see the coverage on the front pages of important daily newspapers. I guess the knowledge is in our genes, who knows?
In this article I want to introduce you 3 Turkish contactees. Don’t worry they are not historical or mythological characters from the past. They are from the present time and they had very normal, simple lives—until they encountered the Aliens.

A FAMOUS CONTACTEE FROM TURKEY and THE MAP OF THE UNIVERSE

Behçet Öcal lived in a small village near Nevşehir / Cappadocia in central Turkey. This area is famous for underground cities and multiple UFO flaps. He is known as the most famous UFO contactee from our country. When he started to have his first close encounters in 1948 he was a 15-year-old shepherd living with his family. In his very simple life style he didn’t have the chance to get any education. And there was no power, no radio or movies etc. in the village where he was living.

That day when he was taking care of the animals outside of the village he heard a strange sound from the sky. The first thing he saw was a bright ball of light. In his own words, it was stronger than the sun light. In that moment he felt a weird sense of palpitation all over his body. When the ball of light changed its shape he was clearly able to see a rocket shape object decending from the sky in a vertical fashion. The object had a metallic look and it was almost 30 feet long. Behçet Öcal was scared but at the same time he says that he was in another state of mind.

A door on the object was opened and 3 visitors came out, two men and one woman. According to Behçet’s description they were humanoids and they had very big eyes. Both of the men had completely shaved heads, and the woman had long hair. The three had the same size and height as if they were made from the same pattern. Their clothing was very foreign to a young village boy of 1948. They wore a kind of fitted jump suit. For Behçet one of the most interesting things was what he called their “illuminated tool” hanging on their necks. The tool also contacted their waist and there were buttons or keys over the panel of the tool and Behçet remembers lights on the panel.

He was in panic. Behçet had no idea about space, space ships or Extra Terrestrials. All he could think was that the strange looking people were coming from the United States or from Russia. In that moment telepathic communication started. They told him not to be scared and that they were not going to harm him. After these first words he felt much more relaxed and as he says, he never felt so peaceful. The visitors didn’t name their home planet but they told him that they came from “another world.” All communication was telephatic. One of the ETs extended his hand to Behçet. The visitors’s palm was round and deep like a small size bowl. When he was touched by the ET the shepherd had a kind of shock, fell down and fainted. When his family found him later the visitors had gone and Behçet was still unconscious. He was taken to the hospital with skin irritation and burns.

Behçet was a quiet and shy man, and he kept his secret to himself until 1977. But between all those years he was in contact with his Extra Terrestrial friends. Only that first visit was face to face; after that they never got together in person. Instead Behçet saw them in a kind of big screen which used to open in front of him, usually at night.

When Behçet had his first media-newspaper interviews in 1977, he showed a Universe Map that he had drawn with the help of Extra Terrestrials. At the beginning military and scientists were somewhat interested in him. But as far as we know Behçet Öcal didn’t get enough much from them. So his case was forgetten with time. He wasn’t interested in being a celebrity because of his experience. He didn’t try to sell his story. In a way he gave it away to the press of 1970s.

Behçet never wrote a book nor did he make any TV appearances. He kept living in his remote town in the central part of Turkey. He wasn’t a sect leader and didn’t try to have fans or followers. But he believed in his experience and for some reason he prefered to put a limit between himself and the media. Maybe he saw and knew more than he was telling, but all his secrets or his realities will be a part of the legends in the next generations.

This modern case is from 1979. The person who had the experience was an elementary school teacher, a young man.
On the first night of the encounter Burhan Yılmaz stayed outside watching the sky until 2:00 am. Suddenly he noticed in the sky a very bright flying object that came closer to the ground. The object was in the shape of a half dome and slowly landed on the field without any sound. It was the size of a minivan. A kind of energy field was surronding the UFO. The UFO stayed there for a while. Burhan Yılmaz observed it until it lift off and fly away in the dark sky. But he could not remember how long he stayed there watching the UFO. After the object left he immediately did some research on the landing spot but didn’t find any trace or any burning grass. Everything seemed normal.

The following night Burhan was reading at his home where he lived alone. At 9:30 pm he heard knocking on the door. It was three young men around their 30’s whom he had never seen or met before. They were wearing black suits and black ties. As Burhan lived and worked in a very small town the fact that his visitors were complete strangers to him was not normal. Because in these small towns everybody knows everybody. But even though Burhan Yılmaz never saw them before he invited them inside as is the Turkish tradition and they sat in the living room. The visitors explained that they came from another town 8 km away. At this point Burhan Yılmaz went to the kitchen of his very small home to prepare tea for his guests. And he came back to the living room only after 2 minutes. Now he was very surprised because his visitors were gone. 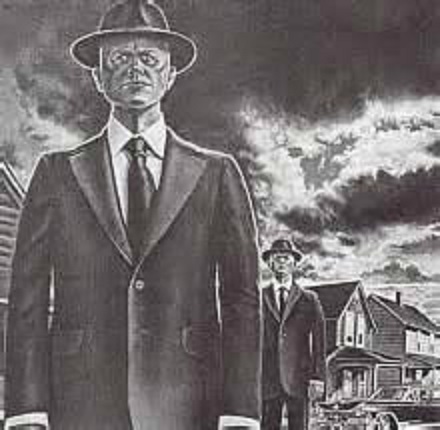 Burhan searched his tiny home and they weren’t anywhere. It was impossible for them to go outside from the main and the only door, because to do that they had to walk by the kitchen where Burhan Yılmaz was, and he would have seen them. They could not have left through the windows either because there were iron bars on all of them. On the street there was only a little girl playing by herself. He asked her if she saw the 3 men. She said ‘Yes’ and pointed to the corner of the street. But there were only three black dogs growling in the corner. Suddenly a neighbour woman came running screaming in panic. She said that she had just seen three men flying to the sky.

This case is interesting as it starts with a UFO sighting the night before the visit of the three men. Also, Burhan Yılmaz cannot estimate time surrounding the sighting and how long he stayed there watching the UFO. There might be a missing time factor there. Does missing time mean an abduction? We don’t know. He didn’t know either. But the three men in black were seen by three witnesses.

A LONG TERM RELATIONSHIP WITH AN ALIEN

Nejdet Boyanay started to experience his first encounters with a mysterious entity when he was 10 years old. He still remembers what happened that night with interesting details. According to his report he was lying down in his bed and starting to fall asleep. But suddenly he noticed that he wasn’t able to move. All his body was in a complete paralysis. He tried to yell and call his mother but he couldn’t.

After that night he had at least two encounters in a week with a strange visitor. He was touched by him and he says that the hands of the visitor were extremely soft and the touch was sticky like a jellyfish. Later he drew a picture of the visitor. Whenever he came, Nejdet found himself in a paralytic condition with a strange humming sound filling his ears. And when the visitor left, the young graphic designer felt as if he was stuck in some kind of vortex. In all those years Nejdet couldn’t speak about his visitor. He wasn’t allowed to speak about his experiences. 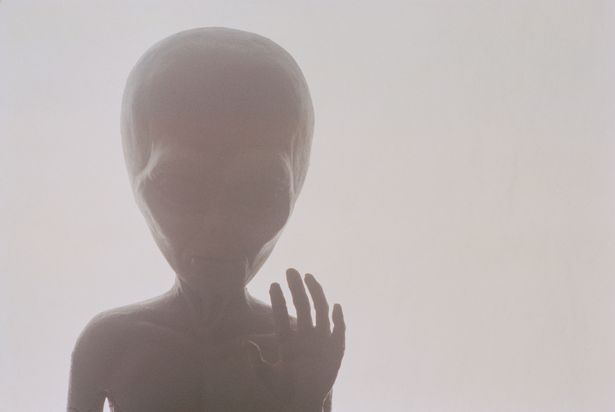 Nejdet got married, and after the marriage the encounters increased. In 1996 he decided to give an interview about the experience. But this would be the first and the last interview. Because after he spoke with the reporters he had a strange accident in the shower. According to him the alien got very angry and tried to drown him. After this incident Nejdet never granted any more interviews about what happened to him.

Nejdet wasn’t very interested in Alien abduction phenomena. He believed that the being which contacted him was a kind of negative demonic entity. But it was obvious that he was totally under the control of his visitor. The visitor was scaring him great deal and Nejdet never dared to talk about him to his family since his childhood. This wasn’t a spiritually enlightening contact. This was fear, mental and physical control during all his life. There were no promises of being lifted to the 4th dimension or saved by the Extra Terrestrials. As Nejdet was very scared of sharing his experience we haven’t heard from him since he gave this interview.

In Turkey the strong belief on the interdimensional beings or jinns sometimes causes confusion. Abductees can a mistakenly confuse Alien abductions with demonic jinn attacks. As the general aspects of the contact are very similar both in jinn and Alien attacks it can be hard to see the difference. Both jinns and aliens leave physical traces such as bruises or cuts. Both of them can communicate with the humans using telepathy. But this is a very long detailed story and will be the subject of another article.