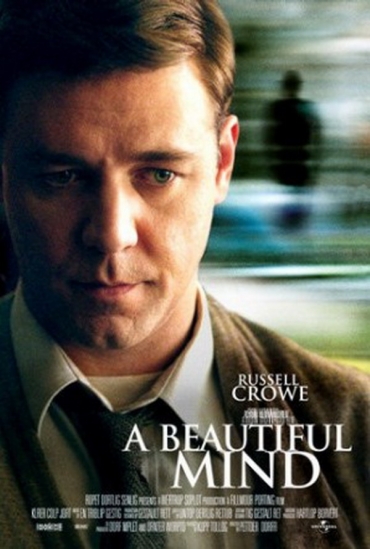 A MAN IN BLACK, AN IMPLANT AND A BEAUTIFUL MIND
By Farah Yurdozu

“A Beautiful Mind” directed by Ron Howard in 2001, starring Russel Crowe and Ed Harris, not only gives us the less known details from the life of renowned mathematician John Nash, but also opens up a very clear page of the Cold War years where panaoia seized the mind of the masses. The end of the Second World War saw the beginning of new worries such as the nuclear threat, worldwide spy conspiracies and a possible invasion by Communists… or from Extra Terrestrials when the new UFO age began with the Roswell crash case.

This was the outer world of John Nash in the 1950’s. But according to this movie, his inner world seems to be much more complex than his outer one. “A Beautiful Mind” takes us first to his Princeton years where he quickly became recognized as a young genius, although he is socially very ackward. His friendly roommate Charles offers him companianship and soon becomes his only link to the outer world where normal people do normal things. Young John Nash claimes that he doesn’t like people, and people don’t like him. Only a little girl, Charles’s niece, brings some joy into his life. 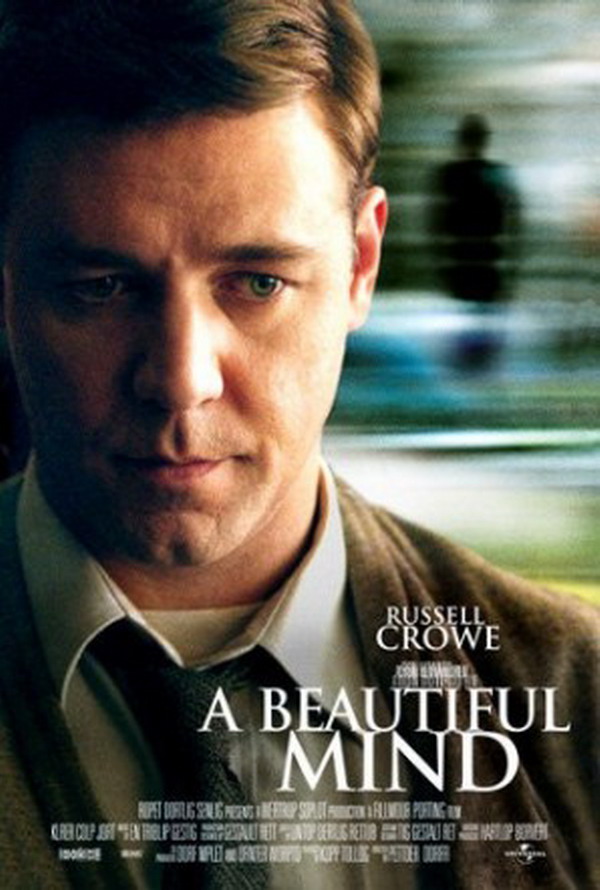 When John Nash graduates from Princeton we see him on a special mission in the Pentagon as a successful code breaker. After that, “Big Brother” William Parcher enters in his life and his mind. William Parcher is a typical man in black (MIB) that we know very well from UFO literature. Cold, controlling, demanding and scary. He has a kind of artificial look with his pale skin and ice blue eyes. He wears the classic black hat and suit, and drives a black car. This MIB offers Nash a chance to become a vital member of a secret operation against the Russians, who are trying to explode a portable atomic bomb in the United States. John immediately accepts this top secret mission without considering the consequences.

In a secret facility John is given a radium implant in his arm which can only be seen under a special light. The implant makes him a total spy of the black ops. And all he has to do is study magazines and newspapers in order to detect the secret codes the communists use to communicate with each other via advertisements, articles and headlines. John starts to look for the hidden messages, cutting out and collecting thousands of newspapers. He comes to believe that Russian agents are after him. While he frantically tries to serve the government and save the country under the pressure of MIB Parcher, he is diagnosed with schizophrenia.

Roommate Charles, his niece Marcie and MIB Parcher never visit John when there are other people around. In fact nobody sees and knows them except John himself. Time passes and everybody gets older but they always stay the same age. Because they are not real humans. But what or who are they? Do these mysterious people only exist in John Nash’s reality, which is shaped by schizophrenia.? Or do they come from another dimension? The dilemma is this: was John Nash contacted by some otherworldy beings or was all this the symptom of his schizophrenia? 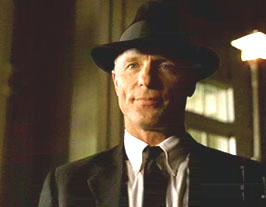 And what about spiritual possesion? Could it be another explanation for this case? What we see in John Nash’s life fits exactly with what we also see in paranormal, spirit and demonic possesion cases. When one or more non-human beings or entities start to command and control the human brain, mind and soul, the possession can cause heavy emotional and physical damage. The possesed person can believe that he or she is chosen by the superior beings for a very important mission such as saving the world from a disaster or from enemies. He keeps talking, seeing, answering the beings who cause the possesion and lives under their control.

Today we know very well that not all of the Alien abduction or UFO contact cases are real. Depending on various reasons, a spirit possession could mistakenly be interpreted as an Alien-ET contact as most of the times it is difficult to see the diffirence, especially at the beginning. The spirit or being posseses the human, and can convince him that the contact has Extra Terrestrial UFOlogical sources. Another common point is that many of the supposed ET-UFO contactees have no scientific background which would help them to evaluate the reality of the contact.

Sometimes this kind of possession is not limited to only one person. A group of believers come together and create the UFO cults where the chosen one is seen as the “New Age Savior” sent by the Extra Terrestrials. The chosen one starts to channel and writes thousands of pages of messages from his contact. Generally the channeled messages are a mix of philosophy and religious information; they lack of the scientific touch and they repeat themselves: “Love each other”, “You are all brothers and sisters”, “We are your space brothers”, “We’ll be landing soon to take you to our planet” are very well known types of messages in this field. In fact the channelling process is only the reflection of the personal inner expectations and hopes. And it has nothing to do with real Extra Terrestrials. But the alleged “contactee” believes that his contact MIB chases him, controls and reads his mind, government agents are listening to his phone calls and monitoring his emails, while his space brothers keep leading him on with new landing dates.

John Nash believed that he was hired for a secret government project. He also believed that he was given an implant. Later he tried to remove it but when he cut himself there was nothing in his arm. As we know, in many cases Extra Terrestrials claim that they remove the implants before they can be detected by X-Rays. Did the same thing happen to John Nash? Did they give him an implant and later remove it?

As his doctor explains, John Nash never had a roommate at Princeton. Agent William Parcher never existed. But they were real for John Nash. They were also real in their own dimension. Just like we see in some of the ET contact or spirit channeling cases only the contactee can see or hear them.

After John Nash is hospitalized and medicated, his mysterious friends dissappear for a while. But when he quits his medication they come back, forcing him to work for the secret project again. The rest is an inner battle of the famous mathematician trying to get rid of MIB, roommate Charles and his niece Marcee who became insistent ghosts. These three beings, non-human entities or spirits who posses Nash are desperate to take him under their control again. They attack him, humiliate in front of others and constantly bother him in every place and time. Nash manages to ignore them. As much as he ignores them, they lose their power, become less aggresive and keep distant. But they are still there, watching.

“A Beautiful Mind” gives us a happy ending when John Nash wins the Nobel Prize. We really don’t know how much of the reality is in the movie. But even in the Nobel ceremony these three beings follow Nash, silently. As Nash explains in the movie, they are there, maybe they will never go away, but he just doesn’t pay them any attention.

Maybe John Nash was really hired to work in a secret government mission. Maybe his MIB was real just like his implant. Maybe the diagnosis of schizophrenia was a cover to keep this secret. Maybe he was mind controlled and manipulated by otherworldy powers all his life. It is hard to know. Only Nash himself knows the truth… if he was allowed to know of course.